What will the future hold?

Posted on April 12, 2012 by embracingtheimperfections

When all my children were little I used to play a game where I would guess what their future careers would be. The eldest was going to be a lawyer or killer saleswoman because she thought the word ‘no’ meant ‘negotiate harder and give no ground’. She is now looking at working with special needs kids.

Daughter number 2 had me a bit worried for a while. She loved to put on a show and one day announced that she was going to be a ‘movie tart’ when she grew up. After some questioning we discovered she meant movie star. She’s now aiming to be a paramedic so she’s changed course considerably.

My son was always torn between being a knight in shining armour or a celebrity chef (he loves food!). After sampling some cooking of his I think he should aim for the first one but he is aiming for IT at this stage.

Number 4 Ashley has a number of options on her horizon. I thought quiz master (she loves to ask questions), interrogator (sometimes the questioning can be relentless) or maybe investigative journalist (definitely leaves no stone unturned in her quest for answers).

Then there’s number 6. We all agree she’s going to be a peace loving hippy who will travel the world but lately she has developed a new and disturbing habit. I think that this one may be hard to stop because it illicits such a big response. Despite my pleas to ignore this behavior no one can stop themselves from laughing, me included. Little miss is very pleased with the laughter she commands and so delights in her new found talent. I’m trying to put a positive spin on it so I’m thinking ‘performance artist’. What do you think? 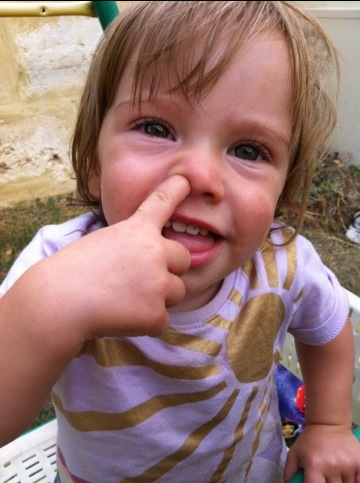 I am a mother of six children. My children's ages range from 20 down to 1, so we are dealing with a lot of different ages and stages, not to mention a lot of different personalities. One of my twins has cerebral palsy so that adds yet another dimension to our lives. Along my journey so far I have learnt that life is far from perfect and that sometimes it's the imperfections that round out the harsh edges and give it a quality that is precious and unique. My love of the imperfect extends into my home life too. I love all things vintage, hand crafted, home grown and home cooked. I love to be creative and I love learning. I am definitely not a minimalist! I aspire to be tidy and organized but I am realizing that with six children, three cats and a crazy black Labrador that is probably beyond my capabilities, so I embrace the beautiful chaos that ensues!
View all posts by embracingtheimperfections →
This entry was posted in Uncategorized and tagged careers, children, habits. Bookmark the permalink.